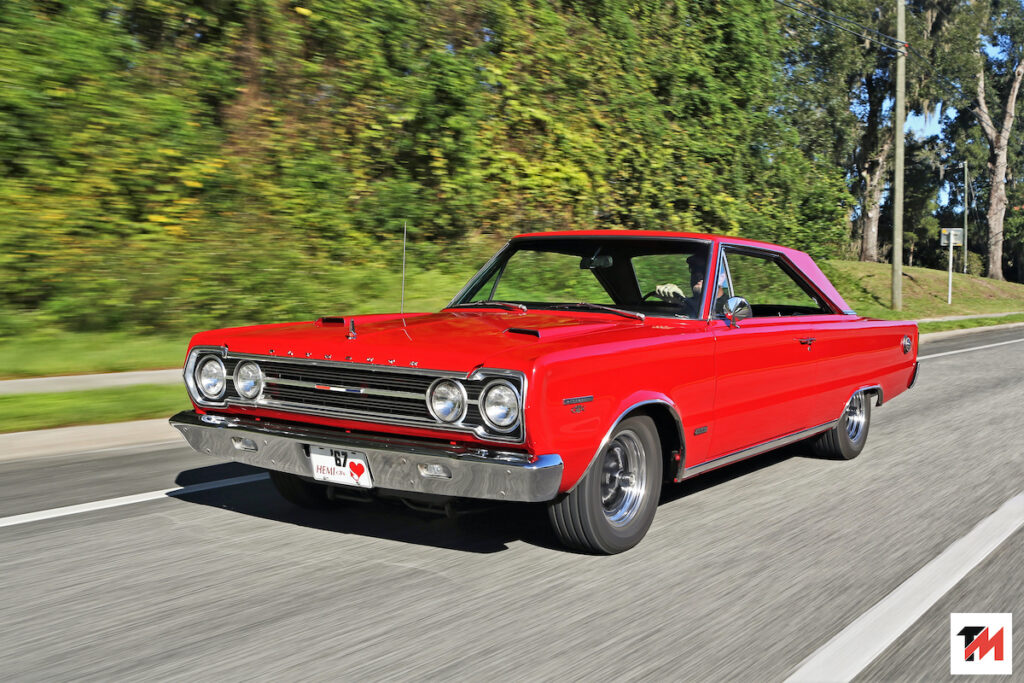 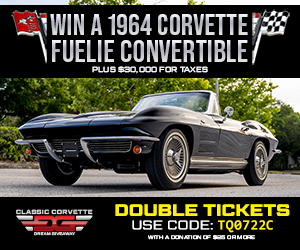 Ever wonder why we receive so much joy by simply revving a high-horsepower engine or doing doughnuts in the Dairy Queen parking lot? Or why the bombastic sound of a rock concert brings us to our feet and has us screaming at the top of our lungs? It’s a phenomenon known as triune brain, commonly referred to as the lizard brain, and is part of our prehistoric past that goes back to the origin of mankind, shortly after we spewed from the primordial ooze and became knuckle-dragging bipeds. Neuroscientist Paul D. MacLean posited that the lizard brain is responsible for our most basic behaviors, such as breathing, eating, and sleeping (sounds good, right?). It also accounts for other primal, instinctual acts like aggression and territoriality.

As we evolved into complex beings, the more intricate, nuanced parts of our brains took control, and the limbic system and neocortex were relied upon for things like language and reasoning. Yet, despite all our technological progress and intellectual abilities, our lizard brain is still very much a part of our DNA. This explains why the heavy sound of electric guitars and boiling our tires into a molten pile of rubber connects with us on such a visceral level. 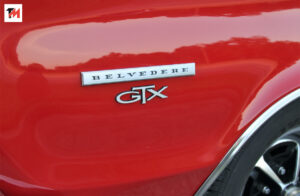 As the muscle car craze was nearing its zenith in 1967, nearly every American manufacturer had entered the battlefield. The car to beat was the Pontiac GTO, which featured an available 360 hp, 400-ci engine and was supported by aggressive advertising campaigns that aided in record sales figures. Sure, the fine folks at MOPAR were producing high-powered cars long before the GTO was on the scene, but this was war, and Plymouth deployed the perfect counterattack.

The 1967 Plymouth GTX, based on the revamped 1966 Belvedere, represented a huge stylistic leap forward over the 1965 designs. Targeted directly at the muscle car set, the ‘67 GTX came standard with a 440-ci mill rated at 375 hp, or the optional 426-ci Hemi, which for the unlearned, was severely underrated at 425 hp. (Most experts rate the true output at or near 500 hp.)

Del Clark, of DeLand, Florida is both a die-hard muscle car enthusiast and a lifetime rock and roller. He tells us, “I’ve been a professional guitar player most of my life and have built several hot rods from scratch. Cars and guitars are my two biggest passions.” While Del has owned his share of clean machines, it’s this 1967 Hemi-powered GTX that was the object of his desire for many years. 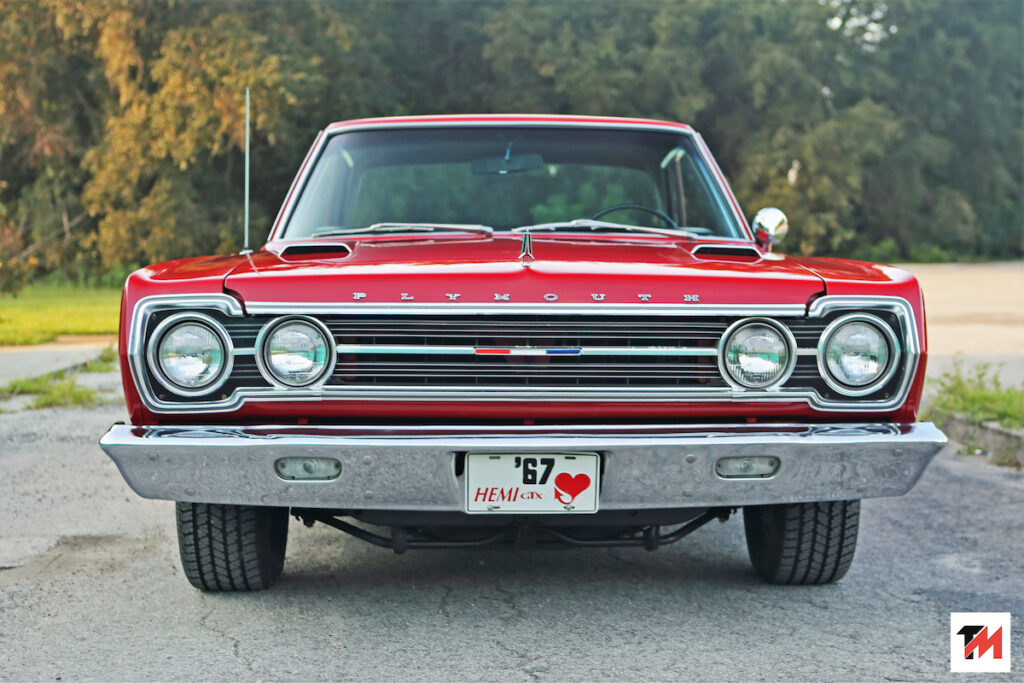 “I lusted for this particular car ever since my friend, Terry Jorgensen, purchased it in 1995. I knew I had to own it one day,” he explains. Del’s patience finally paid off when he bought this Bright Red (code PP1) GTX in December 2019. We’d say Del has a taste for the finer things in life (neocortex), as there were a scant 108 Hemi-powered GTX hardtops produced in 1967, of those, 48 received the 727 TorqueFlite 3-speed automatic and 60 were issued with the no-cost optional A-833 4-speed manual gearbox.” — Del Clark, owner 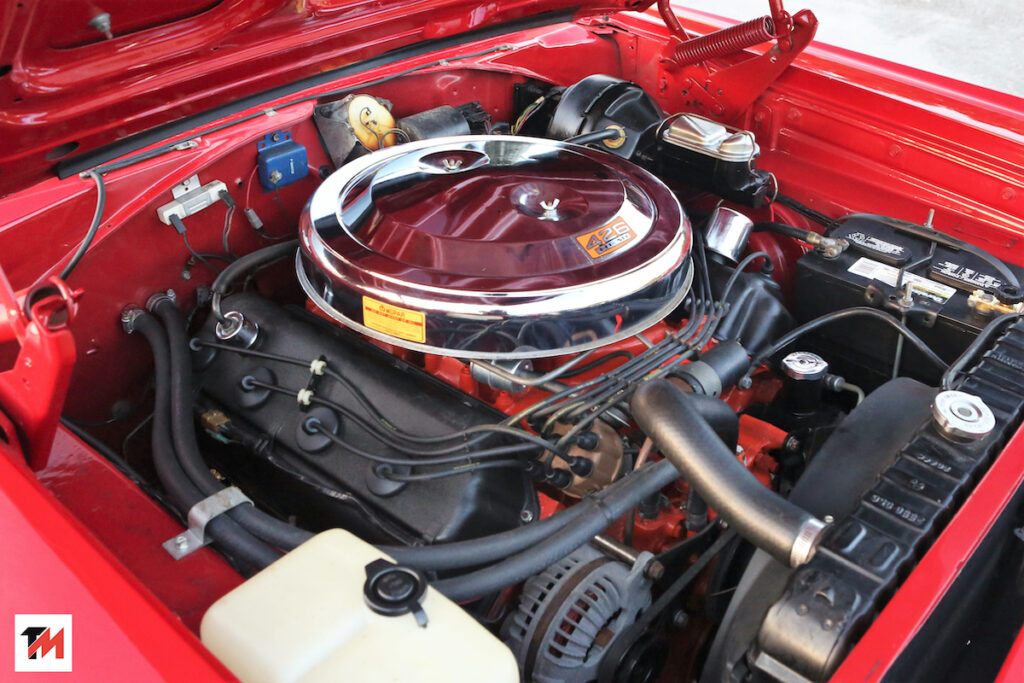 The engine was rebuilt mostly to factory specs in the early 90s and is fed by a duo of Carter AFB 625 cfm carburetors atop a dual plane intake manifold. The solid lifter camshaft features 274 duration and 0.468-inch lift. Compression is set at 10.25:1 and the air/fuel mix is sparked by a points-type distributor. Stock exhaust manifolds expel the ozone-depleting fumes through the factory dual exhaust system, which features 2.5-inch diameter pipes. Every time Del fired up his GTX during our photo shoot, the deep rumble of the Hemi brought a sly grin to our faces. 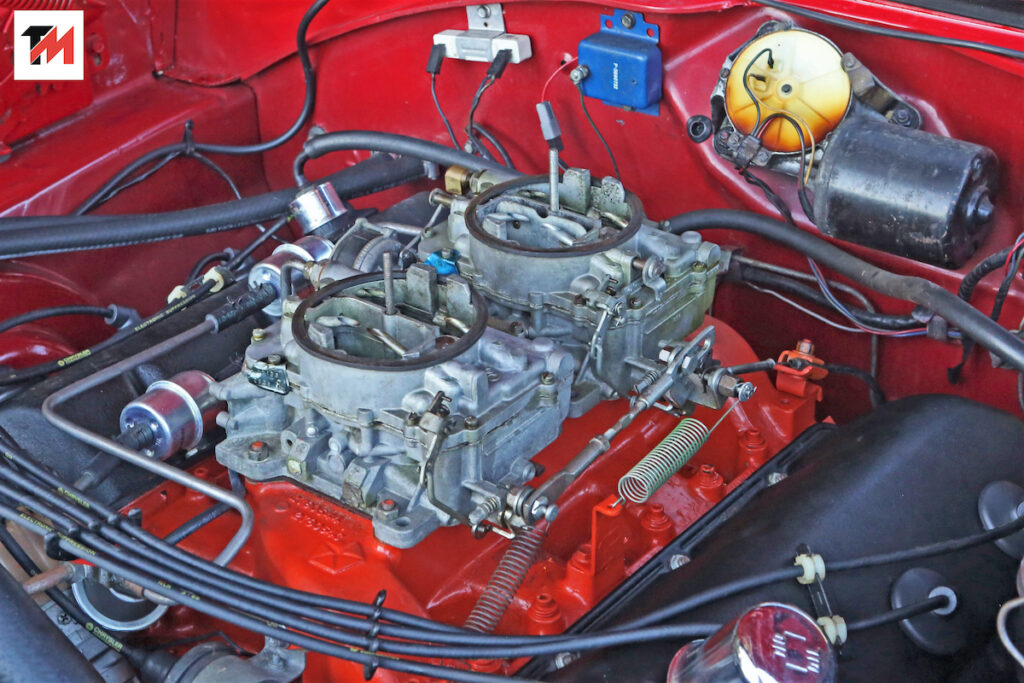 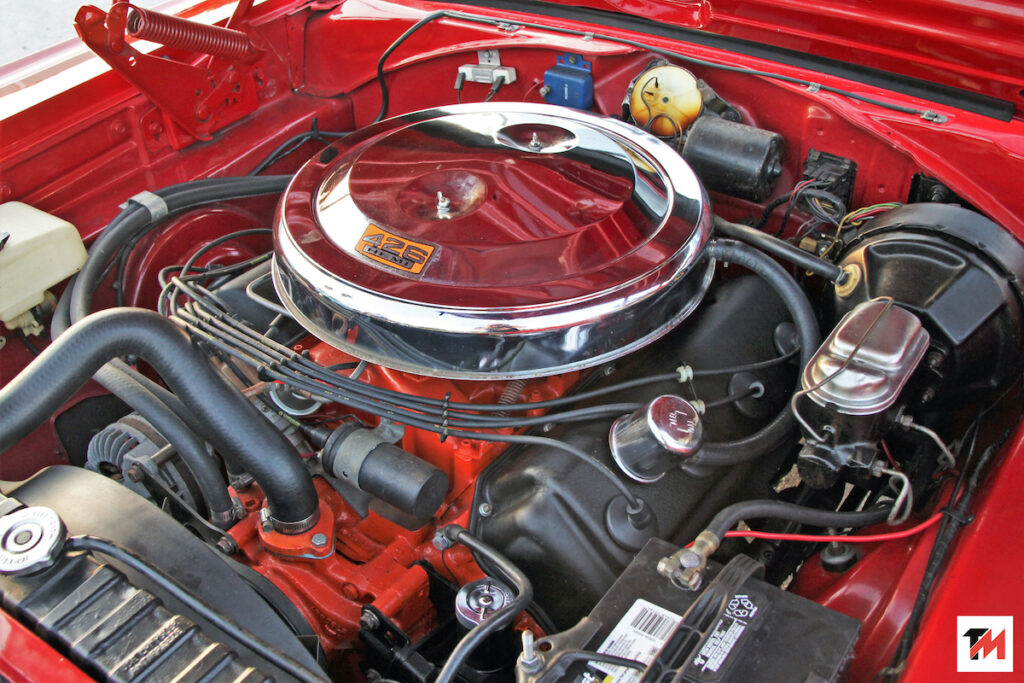 Gear banging in the GTX is done with the reliable A-833 4-speed transmission and Inland shifter. A Dana 60 rear end with Sure-Grip fitted with 3.54 gears handles the Hemi’s teeth-rattling torque with aplomb. While color-keyed wheels with dog dish hubcaps were standard on 1967 GTX models, Del’s car features the extra-cost optional 14×5.5-inch Road Wheels. For improved handling, the wheels are currently wrapped with modern radial rubber sized 235/60/14 at all four corners. Del states, “I’d like to install a set of redline tires, since that’s what the car originally came with. It’s such a classic look.”

Suspension is all factory original, save for replacement of high-wear items such as ball joints and bushings. Heavy-duty torsion bars and shocks, along with a 0.94-inch front anti-sway bar and heavy-duty rear leaf springs keep the car firmly planted to the tarmac. Two interesting options that make Del’s ride unique are power disc brakes and power steering, two things seldom seen on Hemi cars. Rear brakes are beefy 11-inch diameter drums, and when combined with the 11.04-inch front discs and dual-reservoir master cylinder, there’s a good chance you can actually bring this Elephant stampede to a quick halt. 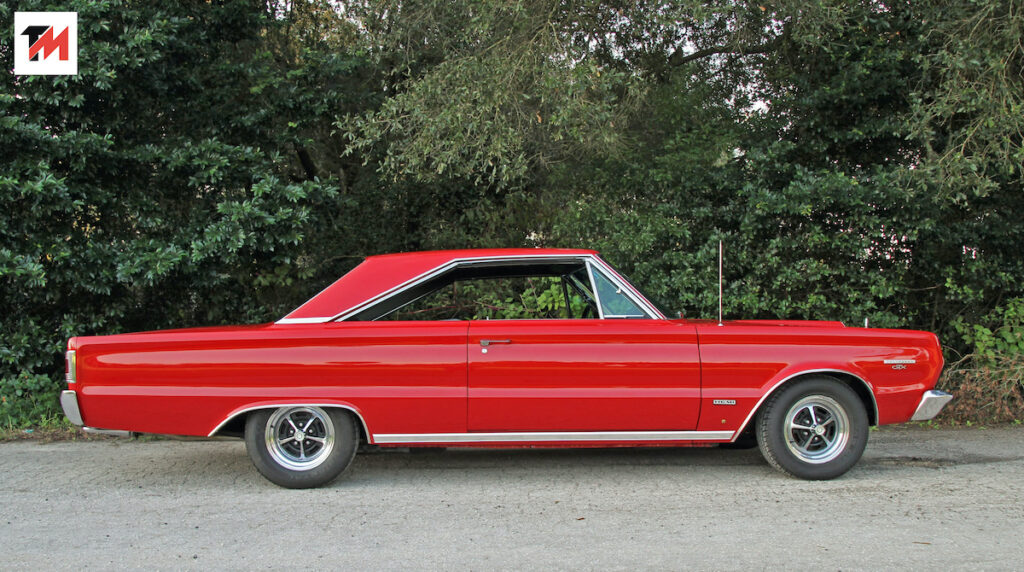 Del Clark of DeLand, Florida had dreamed of owning this Bright Red (code PP1) 1967 Hemi-powered GTX ever since a friend acquired it in 1995. He seized the opportunity when it was offered to him in December 2019, fulfilling his dream.

The all-original cabin was well appointed and tastefully executed by the fine folks at Plymouth. Vinyl bucket seats are accentuated by the optional center console and console-mounted tachometer. The 150-mph speedometer was exclusive to the GTX and begs to be pushed to its white-knuckle limit. A quick peek though the standard steering wheel (a 3-spoke wood unit was optional) will reveal that the odometer reads just over 59,000 original miles. 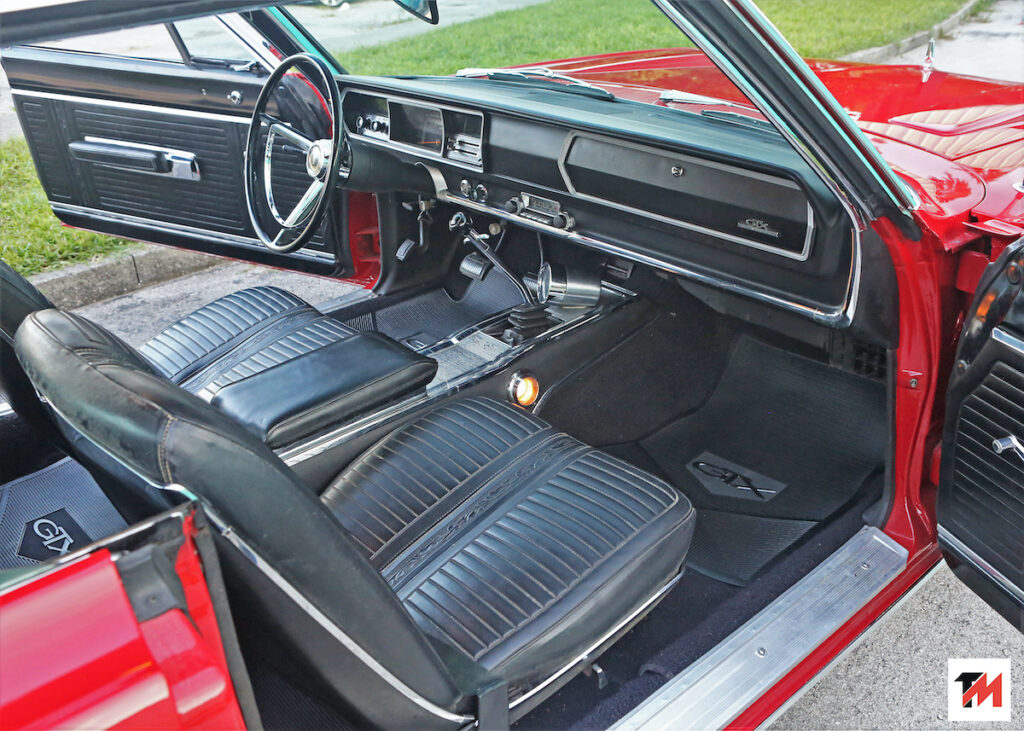 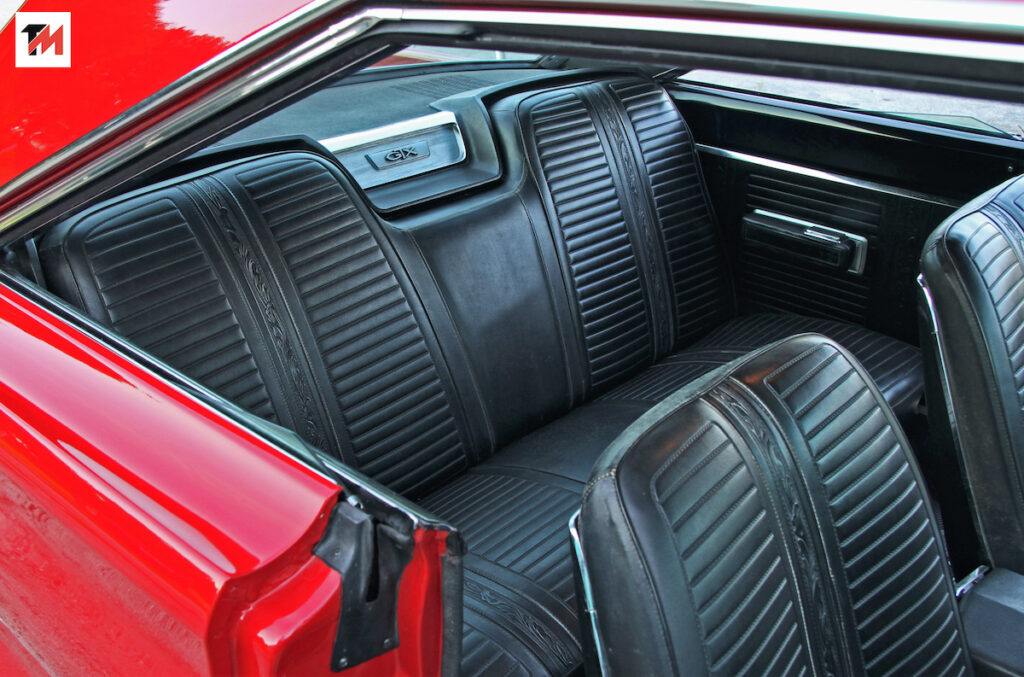 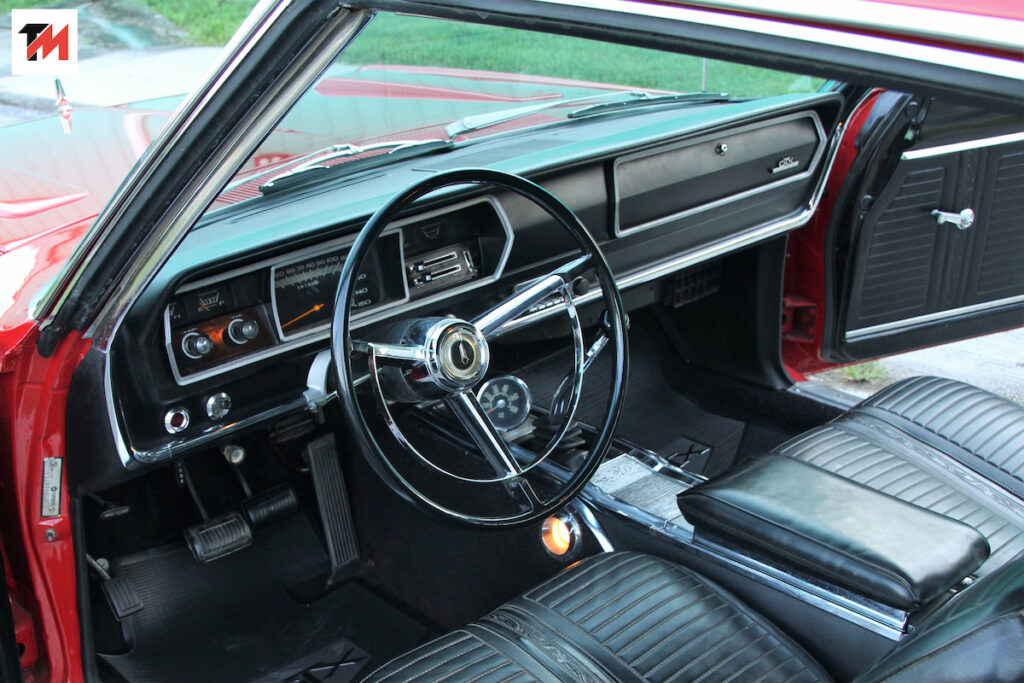 Del has owned numerous righteous muscle cars and hot rods over the years, and his current collection includes a 1966 Hemi Satellite, 1968 Road Runner, and the famous Bill Peterson 1932 Ford Roadster.  While he enjoys the brute force of the Hemi GTX, he drives it sparingly but is planning on attending the upcoming MOPAR show at the Don Garlits Museum of Drag Racing near Gainesville, Florida. “It’s always been a dream of mine to take a car like this to a show there. I’ll soon be able to cross that off my list.”

“Every 426 Hemi I’ve ever had has run well. I keep the points set properly, the air/fuel mixture right, and keep the valves adjusted correctly. When the rockers get loose, they lose power.” — Del Clark, owner

When we asked him about the Hemi’s reputation for being a temperamental street engine, he tells us, “Every 426 Hemi I’ve ever had has run well. I keep the points set properly, the air/fuel mixture right, and keep the valves adjusted correctly. When the rockers get loose, they lose power.” We’re not exactly sure if Del’s experience with Hemis confirms or disproves the Elephant’s finicky nature, but it does prove that a little maintenance goes a long way.

So, the next time you and your bros are out for a little adolescent hijinks, remember that your love of smoky burnouts, thundering exhaust, and the riff to Black Sabbath’s Iron Man is attributed to the wonderfully simple lizard brain. 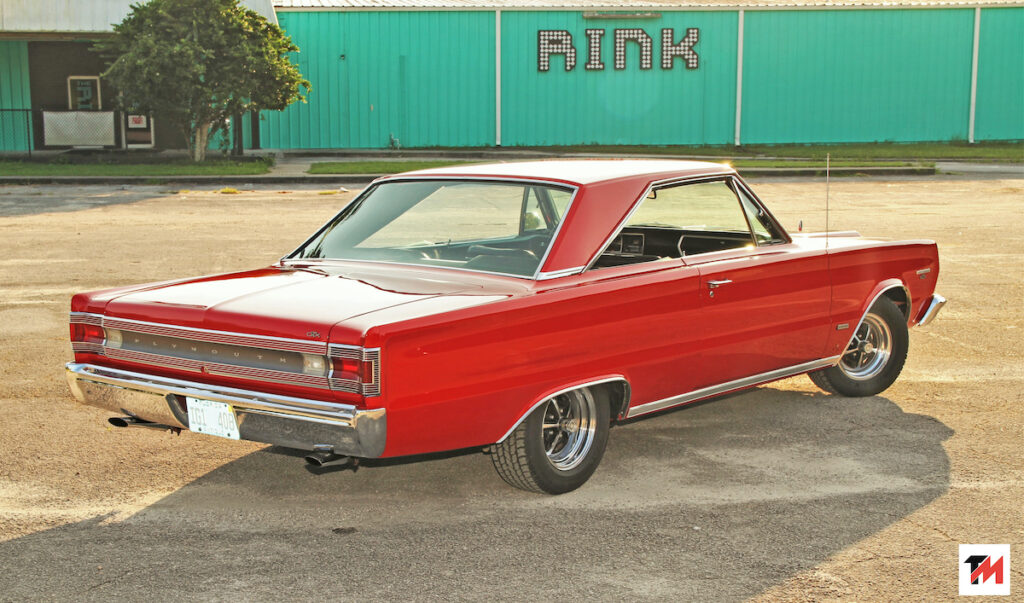 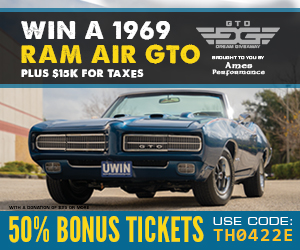 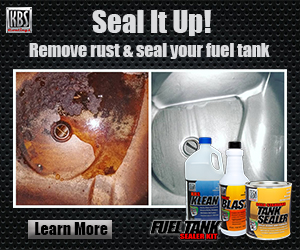 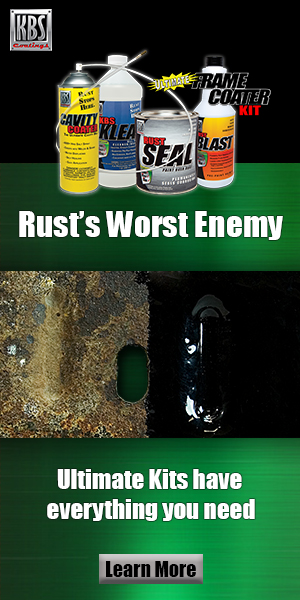 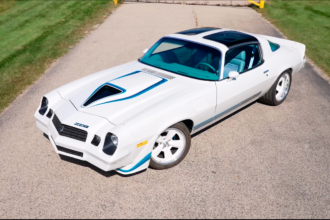