Car Feature: A Pro-Touring Mustang for the Masses 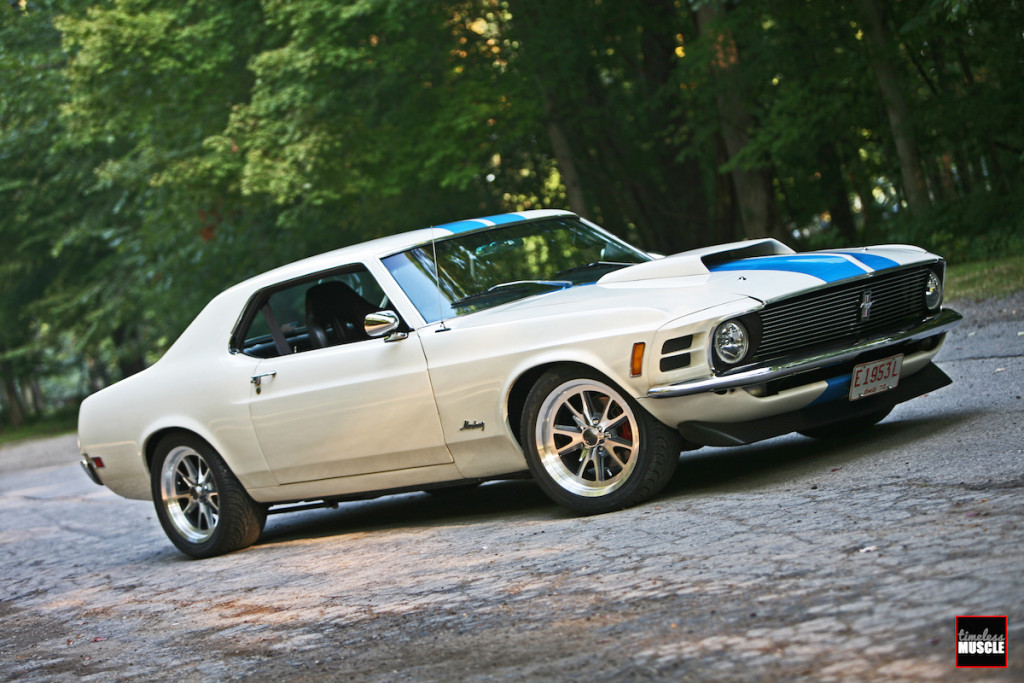 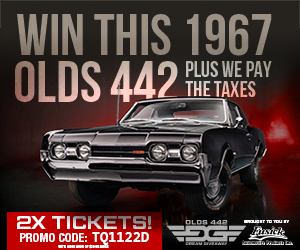 If there’s anything unique about the Midwest, it has the tendency of housing enthusiasts who are passionate about their cars. Anally passionate. Chalk it up to the awful winters and salty, potholed roads, but hot-rodders from Ohio typically persist with the same steed longer than most from warmer climates.

Because when compared to Ohio, enthusiasts from places like California and Florida change cars like they change their underwear, quickly becoming bored with whatever machine they’re tinkering with, while keeping their sights set on the next potential project. Well, everyone except for Jay Leno, obviously. In the Midwest, things are just a little bit different…

A classic case in point are guys like Ron Horning. A current owner of three Mustangs, including a 2002 Saleen S281SC and a 2007 GT daily-driver, we’ve been seeing Ron’s ’70 pro-touring Mustang cruising around our old stomping ground for the last eight years, with each passing “car season” bringing new additions in regards to functionality, performance and eye appeal. It’s been a progression of bland to beautiful, but it’s not been without its challenges.

Ron is a self-proclaimed life-long gearhead, who grew up around his father’s stories that involved his occupation at the local machine shop and his uncle’s hot rods and motorcycles. It’s a passionate love that he had passed on to his kids, who not only share the interest of automotive performance with their father, but spend days hanging out at the local dragstrips and motorcycle dirt tracks around Northeast Ohio with their old man. 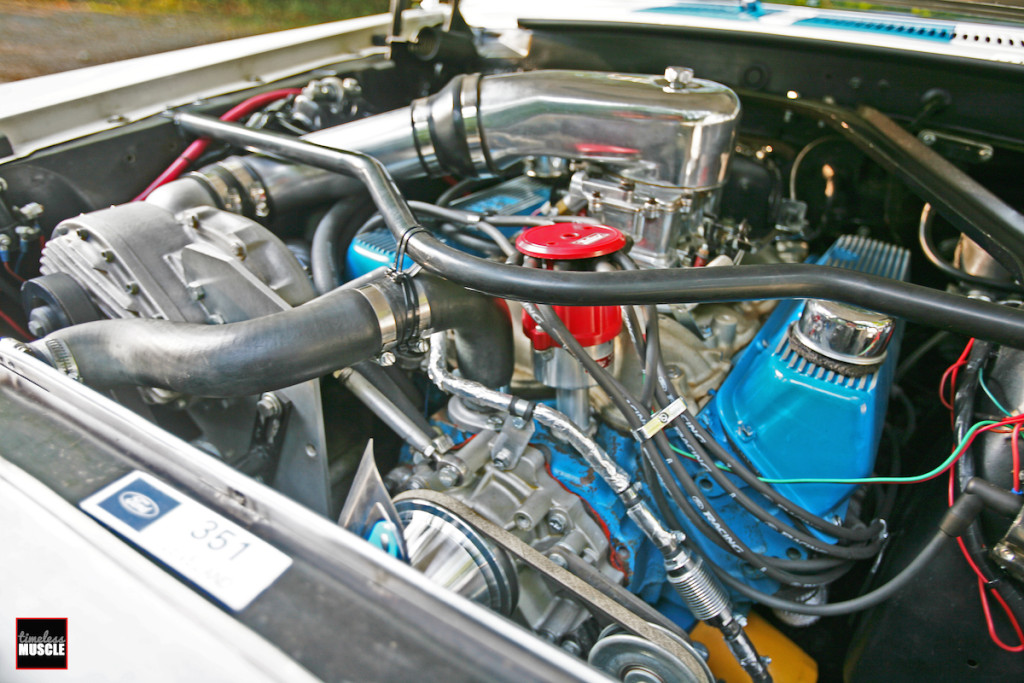 This homegrown Mustang is packing a .030-over 351C, a Powerdyne blower and plenty of bolt-ons! Not bad for a cruiser…

Starting out with a rather mundane 302ci. powerplant under the hood, 3:00 gears out back and a C4 gearbox to shift with, the Mustang has taken a gradual elevation from boring cruiser to ground-pounding bruiser. It’s execution is rather humble, but the resulting product is a healthy blend of pro-touring and street rod.

The factory 302 would eventually get ditched for a much more mouth-watering 351, bored .030 over to a 357 with hypereuthetic pistons, stock Ford connecting rods and an OEM crankshaft. The 9.25:1 compression ratio keeps the head gaskets safe when the 6-psi. of boost is applied; sourced from an old Powerdyne supercharger. It’s a blower originally intended for a 5-liter Fox Body, that Ron had found used from a local car buddy of his, scored it cheap, and fabricated the mounting hardware himself to facilitate the installation onto his old-school 351.

The Powerdyne relies solely on the engine’s upgrade cooling system for longevity, being of the un-intercooled variety. Optimum? Probably not, but we’re talking about a homegrown musclecar built on a budget, here! Speaking of the cooling system, Ron relies on a Summit Racing three-core aluminum radiator, a 16-inch mechanical Flex-a-Lite fan, a 16-inch Zirgo “pusher” electric fan and a 160-degree thermostat to keep that blown Ford small-block cool! He also utilizes a blend of 75% distilled water and one bottle of Red Line Water Wetter for good measure.

This not only keeps operating temperatures in check, but prolongs the life of the powerplant that also includes a COMP Cams‘ XE 262 H-10 bumpstick, spec’ing in at 218/224 duration and a .513/.519 lift. It’s paired with a set of 351C 4V heads that have been treated to a 3-angle valve job, hardened seats, stamped steel COMP 1.73 rocker arms and 2.19/1.71 intake/exhaust valves. All of the engine work was handled by Howard at Boardman Machine.

Helping the blower shove air into the Cleveland block is a Summit Racing 750 cfm carburetor and an Edelbrock Performer intake manifold. Balancing out the air/fuel ratio is an Edelbrock fuel pump set at 7-psi. Responsible for expelling the spent fumes is a set of Sanderson shorty headers, a homemade H-pipe and a Flowmaster exhaust system, with tubing measuring in at 2-1/2 inches. 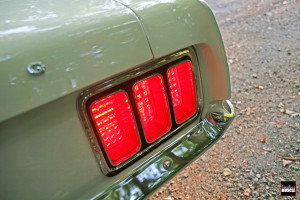 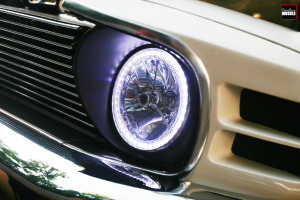 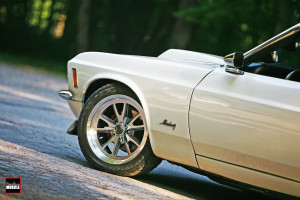 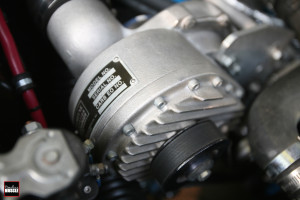 Of course everyone knows that fuel and air are only part of the equation, and if you’re going to have a well-running engine you’re going to need spark! Ron has stepped up the Mustang’s electrical game with a Pro-Comp coil, Mallory UniLite mechanical advance distributor, Ford Performance wires and Autolite plugs.

With an estimated 500 horsepower on tap, the factory C4 had to be upgraded with something more substantial. In this case, Ron has elected to shift his own gears, courtesy of a BorgWarner T-5 manual gearbox paired with a RAM Musclecar clutch, Ford flywheel and a Summit shifter. 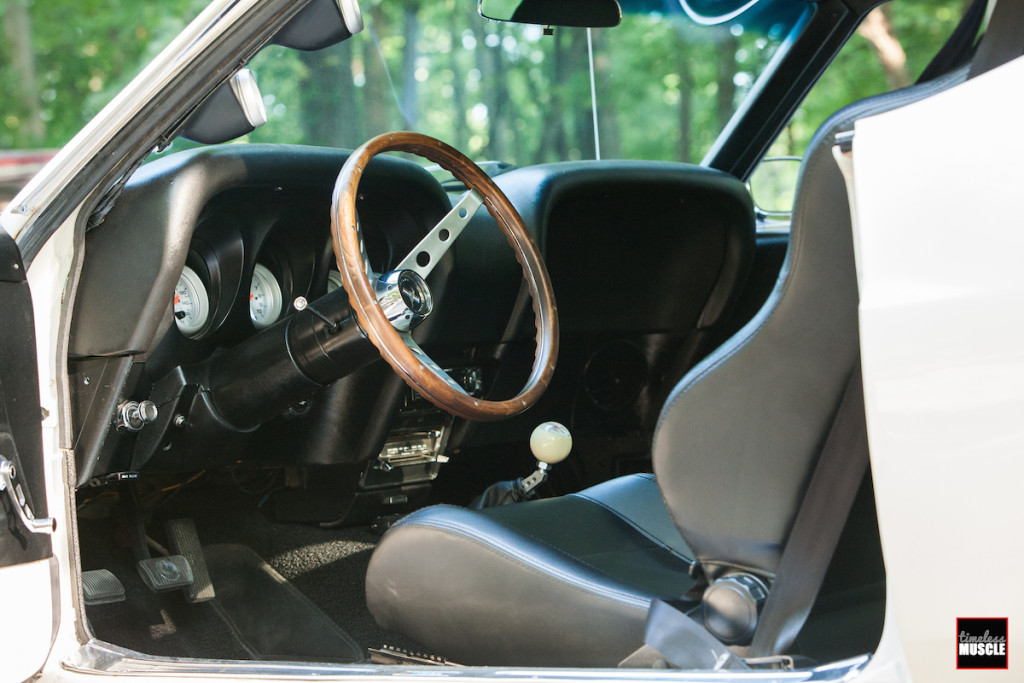 The cockpit is a place of comfort, safety and style. Where 500-watts of stereo is there when you need it and Auto Meter gauges keep you up to speed on engine vitals.

After traveling through the 5-speed manual and custom steel driveshaft from Youngstown Driveshaft, the power is then sent to the 8-inch Ford rearend that now houses 3.50 gears, a Ford Traction-Loc differential and factory Ford axels. Although not the super-beefy 9-inch most enthusiasts covet, the 8-inch is holding its own during the weekend cruising that Ron partakes in during the summer months.

With the mechanicals in check, Ron turned his attention to the looks of the car, which is painted the factory Wimbleton White with Grabber Blue stripes that Ron later applied himself. Ron wanted to turn his rather basic coupe into a thoroughbred musclecar, so he also added a BOSS ‘9 hood scoop, SSBC/Summit Racing 4-wheel disc brakes and a set of Coy C67 17×8-inch wheels at all for corners. Adding just a dash of 21st century tech to the recipe, he also installed halogen/LED headlights with a complimentary set of LED taillights. 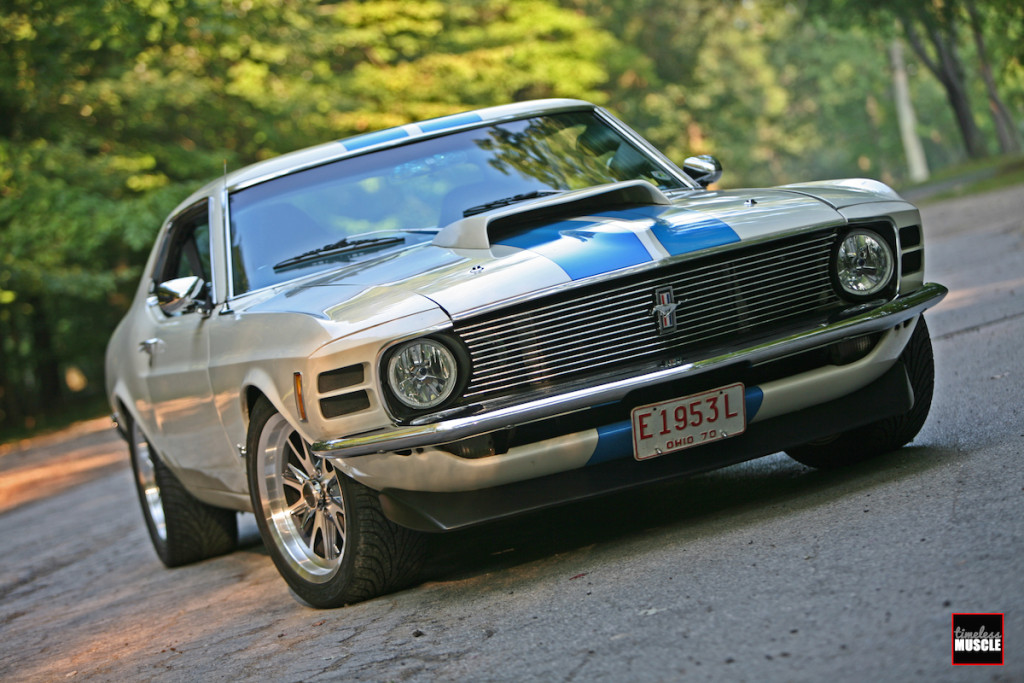 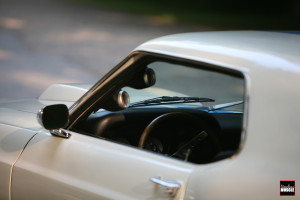 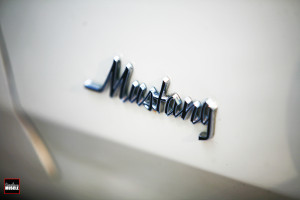 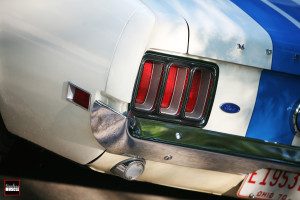 Keeping those aforementioned Coy wheels (wrapped in Nexen rubber) planted to the pavement is a set of Addco front and rear sway bars; measuring 1-1/8 in the front and 5/8-inch in diameter in the rear. These work in conjunction of Viking dual-adjustable coil-overs in the front, Viking dual adjustable shocks and Summit Racing 4-leaf springs in the rear and polyurethane bushings underneath. Competition Engineering subframe connectors tie the unibody construction together, with a Shelby Under Ride traction bar kit ensuring that the rear tires are putting down the power efficiently. The car now sits approximately 2-inches lower than factory all around.

The whole package is brought home with the interior; as Auto Meter gauges, Summit Racing sport bucket seats and a 500-watt stereo system provides music for Ron’s ears, when he’s had his fill of the soundtrack the blown 351C provides – which isn’t too often.

Ron’s pro-touring Mustang is a testament to those persistent individuals out there that have to deal with the Rust Belt; who are limited by precipitation, off-season track closings and overall crummy weather when it comes to enjoying their pride and joy. It’s a perfect example that the “common man” can have his slice of the cake and eat it, too! 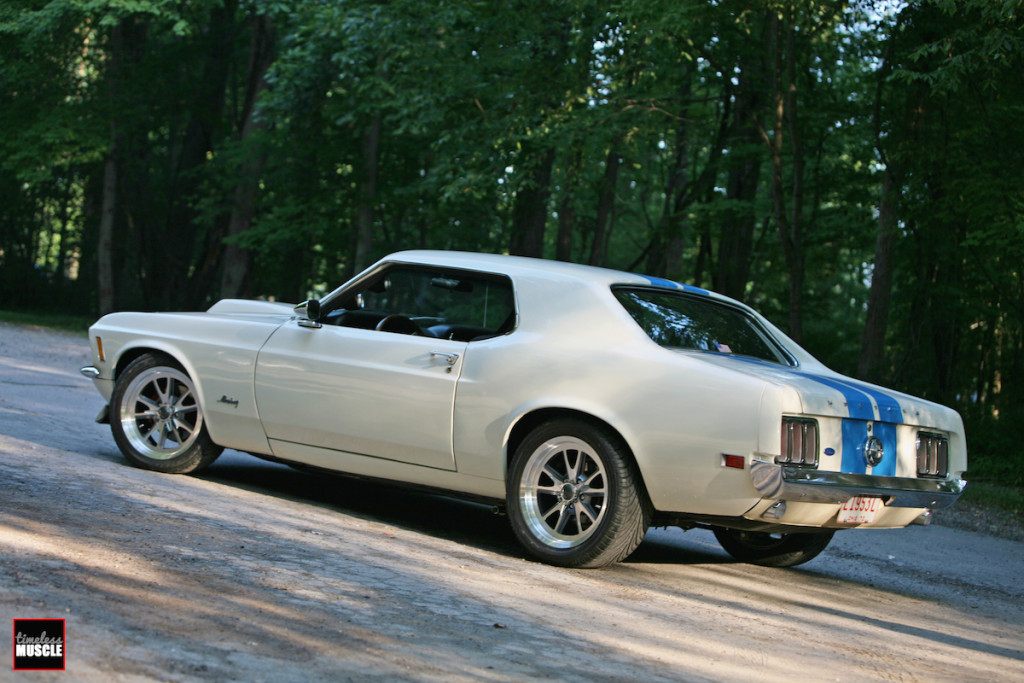