We’ve once again teamed up with Dream Giveaway to offer our readers an amazing opportunity to WIN this beautifully restored ’69 Super Bee. Using our specific code from Timeless Muscle Magazine, you’re also able to earn free additional tickets with your purchase. Click HERE to ENTER.

“This is the new 440 Magnum V8-powered Dodge Super Bee Six Pack. With? A fiberglass scoop so mean-looking it will scare you. And a hood you take off, held down by four NASCAR hood pins. ’Nuff said?”— Dodge (1969)

Are you ready to put a rare, fully restored Dodge muscle car in your garage? Meet our newest grand-prize, a 1969 ½ Dodge Super Bee, an old-school big-block Mopar muscle car so menacing that it was only available for half a model year. When you help out eight great charities today, you’ll be one giant step closer to putting this incredible grand-prize Dodge Super Bee in your garage. Plus if you’re the winner, we’ll pay $15,000 for the taxes. Keep reading to learn more.

Hot from the hive mid-year 1969, the “Lift-Off” hood Super Bees, also known as code A12 Super Bees, were Dodge’s directive for those who desired a lightweight mid-size muscle car, which could beat the heavier 426 Hemi (and nearly everything else from Detroit!) from streetlight to streetlight.

This grand-prize Super Bee is the rarest of the versions produced —1 of 153 in the pillared coupe body style with the optional three-speed automatic transmission. It is also one of the lowest-mile examples known to exist with a documented 27,000 miles on the odometer!

When you enter the Super Bee Dream Giveaway, you’ll be in the running for this fully restored 1969½ Dodge Super Bee.

Veterans’ and children’s charities are counting on you. Enter now.

This 440/Six-Pack Super Bee Can Be Yours … All Yours

All 1969½ Dodge Super Bees included a 440-6 big-block engine rated at 390 horsepower, three Holley 780-cfm carburetors, an Edelbrock aluminum intake manifold and a heavy-duty four-core radiator. Plus, they all included a 4.10 ratio, 9 ¾ Dana axle with Sure Grip differential. G70x15 Polyglas tires on 6” wheels. 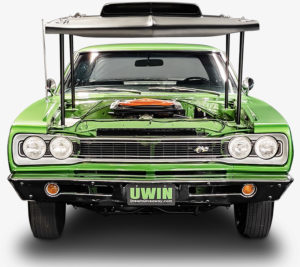 For an original sticker price under $4,000, Dodge’s street-scorching 1969½ Super Bee made high performance affordable for the masses.

The Fastest Path Between Two Points is a Straight Line

The 1969 ½ Dodge Super Bee was built to go fast in a straight line, which made it popular with street racers and weekend drag racers. 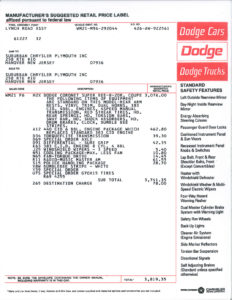 This is the first time Dream Giveaway has given fans a chance to win a Super Bee and this grand-prize is one of the most incredible Super Bees ever produced. Don’t miss this limited-time offer to get your entries!